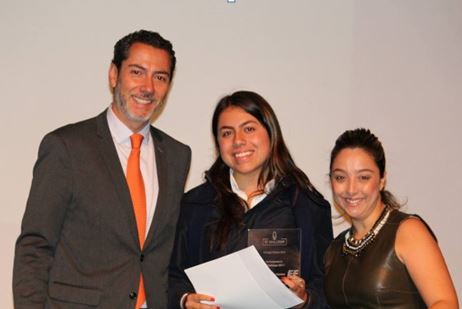 On 22nd April, our representative attended this important appointment in the world of English Language learners.

It was Juliana Zambrano Roldán the student who addressed the audience at William Shakespeare Theatre in Bogotá representing the best students of our CNY, competing with other 25 schools from Bogotá. It was a great opportunity  to realize how good she is.

She was there with her family some of her friends who supported her from 8:00 a.m. to 1:00 p.m. in a final step among 2100 students in the country who had accepted the challenge to answer the question “What does it mean to be a global citizen?”

It was a real pleasure to be there with all of them, jury, organising staff, and contestants. Although she was feeling nervous, saying she was going to forget her speech, she did it marvelously with a great interaction with the ones listening to her, not forgetting or even hesitating. It was a demonstration that having worked hard with the school programmes, planning and preparing their assessment and testing activities is so hard that this competition was something easy for her.

As school, we have already participated twice and expect to be part of it many more years in the near future.  Once again, Juliana… “WE ARE PROUD OF YOU”.